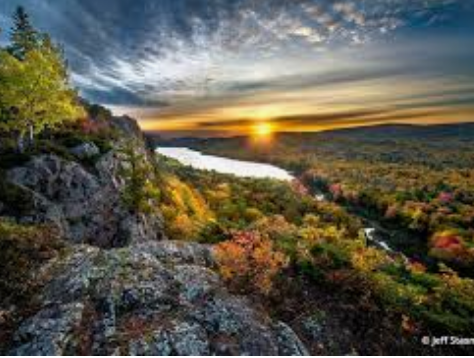 Preserving the Porkies: a New Strategy Is Born

Ray Dick led the campfire conversation, telling of the fight he had been making, almost single-handed, in the hope of keeping the loggers out of these valleys along the Carp and the Little Carp and the Presque Isle.

“We know what we need to do,” Dick said. “Our job is to persuade the United States or the State of Michigan to come in and buy the whole 50,000 acres before it’s too late, and keep it the way it is! A few of us have been preaching that for years, but we’re not making much headway.”

A produce dealer in the town of Ironwood, 30 miles west of the mountains, Dick had crusaded for the preservation of this beloved wilderness, where he had hunted and fished for years. He had talked to everybody who would listen. He had gone to other businessmen in the community, he had written countless letters, he had pestered state and local officials and political leaders. For the most part, they agreed with him, but there their interest seemed to fade out.

A local congressman, Frank Hook, had gone so far as to introduce a bill in Congress proposing to set aside $10 million to purchase the Porcupine wilderness and add it to the Ottawa National Forest which already took in a big share of three cutover counties in the Upper Peninsula. But the bill had bogged down, and nobody believed it had much chance of passing.

“Too much money,” Ray explained, “and anyway, Congress is against appropriating funds to buy forest land in individual states. Logging crews are nibbling at the edges right now. Five years from tonight will be too late as far as a lot of this is concerned.”

I chewed on the problem for a minute or two. “What you need is outside help,” I suggested. “There are a lot of folks around the country who love this kind of place as much as you and I do. Some of them have influence. If you could get them into your fight, you might win.”

“We realize that,” Dick agreed, “but how do we go about it?”

There was another long, thoughtful pause. Then somebody came up with a suggestion. “Why not organize a Save-the-Porcupines Association, nationwide?”

“Sure,” another chimed in. “Invite anybody, anywhere, to join who wants to see this country kept the way it is.”

I could see the idea catching on in Ray Dick, starting to burn like the lightning of a slow fuse on a powder keg. None of us guessed it at the time, but what we were witnessing that night was the turning point in the long and uphill battle to keep the wilderness of the Porcupines untouched.